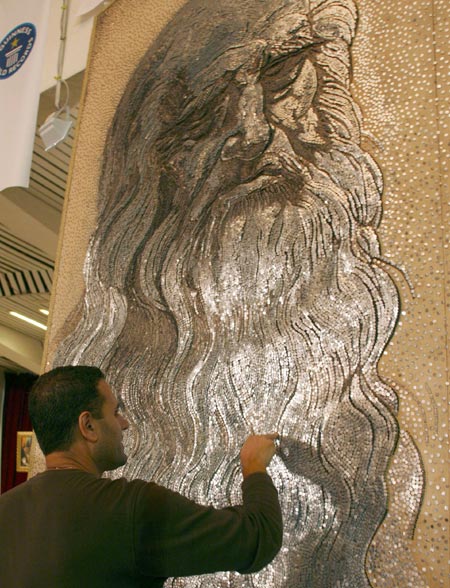 I read about this artwork in KOSMO! tabloid and first thing I was thinking is that.. this is AWESOME! and this Albanian guy is patience enough to nail all these nails.

Artist hammers out world’s largest nail mosaic
By Benet Koleka
TIRANA (Reuters) -Albanian artist Saimir Strati has hammered tens of thousands of nails into a wooden board over the past 24 days to create a portrait of Leonardo da Vinci and the world’s biggest nail mosaic.

“I can officially confirm that we have a new record for the largest nail mosaic of eight square metres,” Guinness World Records adjudicator Scott Christie said late on Monday.

The mosaic stood in the main hall of Tirana’s pyramid-shaped culture center, exactly where a larger-than-life sculpture of the late Albanian dictator Enver Hoxha used to stand.

“I have lost count of the nails, but I think it was around 400 kilos (880 pounds) of nails. I have used different nails. The condition was they should be industrial nails and they are,” Strati said.

Thanks Imageshack“My technique resembles (digital) camera pixels. I have used a nail for each pixel,” he told Reuters.

A video record of the feat showed him nailing away for up to 12 hours a day.

“This is something quite unique and quite spectacular,” Christie told Reuters, adding the mosaic is “a completely new category” for Guinness.

“We did not know quite what to expect before we came, but we are amazed and truly astounded at the fantastic work he has done, days and nights and hour upon hour,” he added.

“Someone will have to try to beat that, but I do not think it will be beaten for some time.”

I wish that one day his artwork will be exhibited in Malaysia because I would like to appreciate it and have a look at it closely. He said he applied the pixel with different sizes of nails.. yeah.. its the same as stippling technique using different points of felt tip pen.